This is the first part I of the ‘Inscriptions of Ceylon, Volume V; it contains a historical introduction to the texts and translations of 115 inscriptions, both published and unpublished , belonging to the period between 815 to 923 AD, covering the reigns of Kings Dappula II (815-831), Sena I (833-853), Sena II (853-887), Udaya II (887-898) Kassapa IV (909-914) and Kassapa V (914-935). There are a few other records, which could be ascribed to the reigns of those kings, which are very fragmentary, and a good number of other records which cannot be attributed to any particular king; these are not included in this Volume.

As this collection of inscriptions has been labeled as Volume V, Part I, one would imagine that Volumes I to IV have been already published by the Department of Archaeology; only Volume I containing all the cave inscriptions found in Ceylon, and Part I and II of the second Volume, containing Rock and other inscriptions from the reign of King Kutakanna Abhaya (41 B.C) to King Mahasena (276-303 A.D) had been edited and published by S. Paranavitana for the Department of Archaeology. Although the Department had assigned the job of editing the Volumes III and IV to two scholars, they were not able to complete them up to now. Thus the reason for publishing this Volume earlier than the Volumes III and IV is that they are not yet ready for publication.

Although this Volume contains 115 inscriptions, we were not able to publish the photographs of them all, for more than 15 records had been edited based on text provided by Eye-Copies, and the rest are very fragmentary.

There are no reviews yet.

Be the first to review “Inscriptions of Ceylon, Volume V Part I – Prof Sirimal Ranawella” Cancel reply
Have a coupon? Click here to enter your code
Product categories 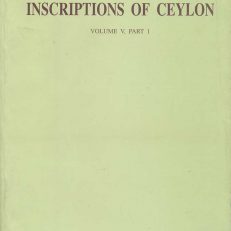