History of The Kingdom Of Rohana from The Earliest Times to 1500 A.C – Prof Sirimal Ranawella

MEMOIRS OF THE ARCHAEOLOGICAL SURVEY OF CEYLON VOLUME XI

HISTORY OF THE KINGDOM OF ROHANA FROM THE EARLIEST TIMES TO 1500 A.C.

Röhana played an important role in the history of the Island almost from the very beginning of its history as a human settlement in the fifth century B.C. On many an occasion during the historical periods of Anuradhapura and Polonnaruva, when the Island was divided among rival powers, when internal disorder brought revolution, or when invaders from South India took possession of the Northern part of the Island, which was then known as Rajarata, and forced some of its people with its rulers to flee to the South, deliverance usually came from this unique Kingdom of Röhana. Knowledge of its history is therefore essential for a proper understanding of the history of the whole Island. I regret no scholar so far has been able to present a comprehensive and critical history of this principality, which is politically and culturally important for a study of the history of the Island as a whole. However, the present editor presented an abridged version of the History of the Rohana Kingom in Sinhala in 2003 on the occasion of the Silver Jubilee Celebrations of the University of Ruhuna. The present publication is really for the benefit of the English educated public.

There are no reviews yet.

Be the first to review “History of The Kingdom Of Rohana from The Earliest Times to 1500 A.C – Prof Sirimal Ranawella” Cancel reply 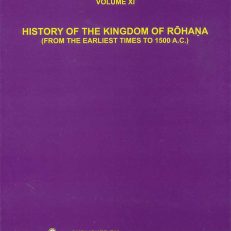 You're viewing: History of The Kingdom Of Rohana from The Earliest Times to 1500 A.C – Prof Sirimal Ranawella රු1,000.00
Add to cart